It’s still early in the evening. A nice and warm early spring day is giving in to a slightly more chilly evening. On this last day of his exposition, I set myself on a stool in front of HOK gallery, awaiting the arrival of Harold de Bree. As far as my information goes, I am supposed to meet him here after opening hours to have a glass of wine or something and to round off with a smalltalk retrospective interview on his experiences exposing at HOK. What will I ask him about? I’m vainly pondering the now too-late possibilities of visiting the rooftop of the former American embassy, still full of obsolete espionage antennas. We could have ventured there either by boat and staircase or by drone and tv-connection.

An unknown fellow comes up. Hi there, you’re sitting so cozily here. Then he walks into the gallery like it’s the normal thing to do. Didn’t he notice that it’s after hours by now? I follow him and ask him if he is interested in Harold de Bree’s works? He asks me if I am Harold. No, unfortunately not. While the man introduces himself as the former Dutch cultural attaché in the capital of capitals, another person steps into the gallery, like stepping into a strange dream of mine, and again it’s not Harold. An artist and building contractor, who is looking for a ‘finnisage’, and by the way, until when will Harold de Bree’s show run? Uh, about half of the works have already been shipped to the buyers. What remains on the walls now is just waiting to be taken down later this week. It’s even smaller than I thought.

There’s the artist himself. Before I get the time to seriously start to wonder about how to conduct the interview, with two visitors attending, there’s a whole busload of children with their parents getting off a vehicle in front of HOK. And they all line up and mount the few steps leading up to the gallery. Harold, Harold, can I ask you my first question? No way, it’s hard enough to keep pencil and paper away from the eager hands of the children. It’s even smaller than I thought. The parents’ French accent makes even our conversational English sound like singing. Chatting-time with a snobbish glass of wine is over before it even started. I offer my guests the choice between whiskey and champagne, and they take both.

More and more people are showing up. A finissage nobody told me about. The artist must have done some ‘texting’ among friends, fans, and followers, I guess. How the hell can I ever get my interview done? Hey, Harold, nice work. – Yes, what is left of it. – A pity, though, about the framing. So nineteen-eighties. – Yeah, but me, I’m very eighties myself. The whiskey finds it’s easy way from red plastic cups to thirsty lips, the champagne or spray-wine really lives up to its name by spraying the floor of the gallery. No lemonade for the children, just tap water. They are kept busy playing with the giveaway toy soldiers HOK has been offering all visitors to Harold de Bree’s show, now over: SSIXS (Submarine/Satellite Information Exchange System) – as militaristic as ever with De Bree. Keeps them from turning off and on the lights. But not from knocking over glasses and cups.

Look who is here? Not the slightest idea, really. They must all be the artist’s invited guests. If they are not just passers-by, drawn in by the crowd. Good spot for a musical performance – by me. Ah, this must be a musician we have here. I want to have my exposition here. An artist, I guess.

Harold gets to signing some copies of the booklet that HOK made to accompany the show. What? Is he putting a swastika to his autograph? No, just a reference to the Indian swastika. What do you know, I found me a German WWII swastika-spoon in a second-hand shop. – Where was that? – In Scheveningen. – No wonder. That’s where they loved to hang out.

What must be an American guest takes his stand opposite the big painting at the back wall of the gallery. It’s quite abstract in the eye of most beholders. But to him, it’s clear: This is New York. The harbor. The skyscrapers. And even, vaguely depicted behind these old school skyscrapers, the next generation skyscrapers, dwarfing the earlier buildings, tall as they may have been. One after the other goes visiting HOK’s tiny bathroom. The conversation turns to suspenders, undies, and pissing. A man comes in, mistakes HOK for the beauty salon that used to be in these premises before the gallery moved in. Can I get me a facial treatment? One of HOK’s regulars turns out to be a magician because out of nowhere he brings forward a half-liter can of beer. Harold himself is no shy refiller of glasses and cups. Is he still up to doing the interview? Harold, it’s a new step in your artistic development, right, these semi-abstract ‘Atmospherical Disturbances’? – Yes, you’re putting the words in my mouth for me. It’s all new for me. A bit nineteen-eightyish, though. Especially the framing. A pity about the frames. Crying out his sudden anger, Harold turns upon his former wife and main criticaster of the framing. She is not a cat to tackle without gloves, and all visitors are forced into the walls of the small gallery, to witness the wild marital twist. A pantomime fight develops into a shadow dance and back again.

Comes in a sharply dressed and freshly pomaded duo, hard to tell how dynamic or undynamic: Have you seen Houellebecq’s movie with Iggy Pop? There were only about ten credits in the end titles. Guess who were two of these few names? All in honor of the ingenious camera rod they developed, to get Iggy, Houellebecq and assorted autistic artists rightly framed, while line-walking down a deserted French village road. Another round of tiny cups, filled to the brim with whiskey. Vapors of weed come drifting in from in front of the gallery like I guess alcoholic vapors come drifting out. What kind of people are these? We? Undisturbed by anything, this bloke here, hale and hearty for his seventy years, tells about the twin piles of written paper he has built up over the years. I’ve been living on cemeteries. Sleeping on Jim Morrison’s tomb. True the gates got closed at night, but you could just unlatch the door from the inside. No urge to have anything published, though.

Harold’s own conversation somehow drifts off to the plane disaster in Nepal, God knows how many years ago, where the survivors saw themselves forced to turn to cannibalism in order to keep on surviving. A connoisseur of the arts puts forward the observation that there are ten thousand artists who are born in The Hague, do their splendid works in The Hague, get famous in The Hague, and eventually die and are forgotten in The Hague. Harold, Harold, your opinion, Harold, on these works of yours? – It’s a multi-layered constellation of worlds. You might ask fifty different questions about these works, and still, I’d come up with fifty different answers. It just isn’t exact. There are no exact conclusions. You may loke at the painting twice, and the conclusion is not the same anymore.

A late woman visitor (It’s even smaller than I thought.) turns down the drink offered. No, I’m observing the Lent. Back in the toilet the sound of drinking glasses shattering on the tile floor.

But Harold, this piece here must be a fen, mustn’t it? With dark blue water against an even darker blue background of impenetrable bushes, and who knows what number of drowned people are under the surface? – You only pay attention to the lower half of the painting, but there is so much more nastiness going on in the deep dark at the very bottom of the piece, as well as in the upper half.

Guests are dispersing; the feast is moving further downtown. Come on, Harold, if you are still able to walk. – I’m by bicycle, so I don’t have to be able to walk. Harold de Bree embarks on a seemingly endless series of farewell hugs. Do I want to join? There will be lines of speed, coke. So. But Harold, our interview. Able to walk, able to talk? Torn between his bicycle and the need to look back upon his now-finished exposition in HOK, Harold de Bree points at the piece that was in the window display during the exposition. That’s what I call a landscape. It is made specific by the conscious addition I made to it. All these works are largely the results of a dripping and spatting process, finished off by sharply drawn, slightly crude scratches that literally bring to light the copper underground of these paintings. Coincidence played a large role in determining the figurative overtones each painting turns out to have after all. But this particular piece is defined by the wipe I made.

Observing his interviewer from under his eyebrows, the artist starts evaluating the amount and mixture of drinks that helped fuel the night so far. Everyone has left. Harold’s phone rings; he must follow them down to the pub. He laughs. This might not have been exactly the right night for conducting an in-depth interview. But it surely is not the right night either to go jumping from a Scheveningen harbor pier and start swimming out to the deep dark open sea. Another series of farewell hugs and a kiss on the cheek. And there he goes. Alone in the night, but not for long. 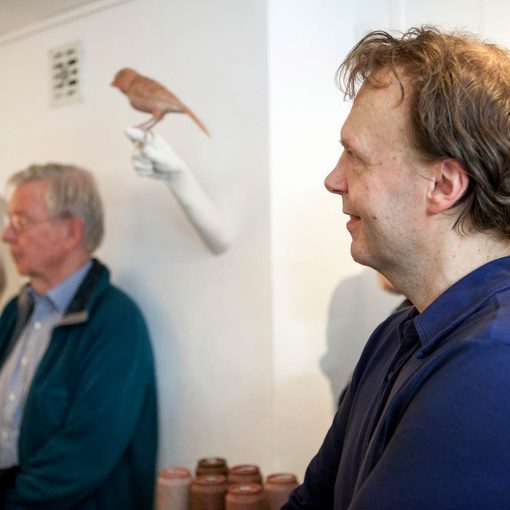 A photographic impression of the Vernissage of Peter Zwaan’s solo exposition Skins in HOK Gallery, The Hague, on Friday 7 June. The exposition […]